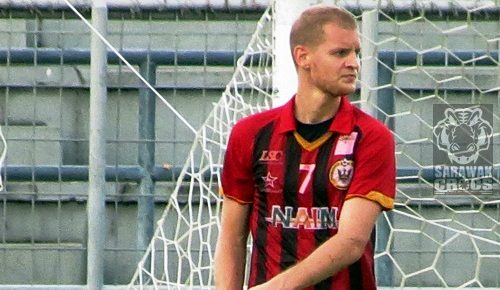 After immerse digging, and thanks to numerous sources, we finally figured out who the unknown import trial-list Sarawak was testing this afternoon.

Ronald Hikspoors, a former PSV Eindhoven striker featured heavily during this afternoon’s game, and even scored himself a few goals in a friendly game meant to test if he fits in Robert Alberts plans.

The now 25-year-old striker was paired with Alireza Abbasfard and showed his talents on the field to the delight of the fans at the stands. The duo ran circles around their opponents defenses, and adapted well to the impressive midfield display led by Joseph Kallang.

According to our search online, Ronald played in the Czech Republic league after his stint with PSV, in which he scored three goals from 38 appearances, two of which were from headers.

The center forward’s club for 2013 remains unknown, but he is said to be a friend to Sarawak attacking midfielder Muamer Salibasic.

Our observation on the pitch during the friendly game today revealed that Ronald has the potential to score goals, and is hardworking on the pitch. He has the accuracy to score goals when presented, and had a lot of ‘on target’ shots during the game. Despite his ability, Ronald may not be signed by Sarawak as Alberts may opt to sign Alireza which could fit nicely as an Asian foreign player.

Ronald’s position is yet to be known as he will need to challenge for the foreign import slot which is also eyed by defender Gábor Gyepes, whom most fans say would be signed to beef up the Crocs’ defenses.