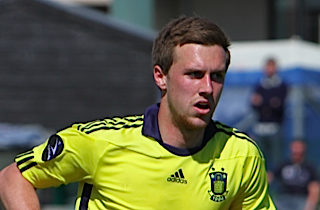 Sarawak today took closer look at Brent Colm McGrath, a 22 year old striker from Australia whom is now at now in Kuching on trial.

The young Adelaide United striker made few appearances for his side last season, but had previously played his trade for Danish SuperLiga side Brøndby IF in which he scored three goals from 43 appearances. Brent also featured heavily in Brøndby youth squad, and was constantly called up to play with Australia’s under-17 and under-20 squad.

The 1.84 meters striker is also part of the Australian national side, being called to represent his country in a game against Germany.

Brent definitely impressed fans that came to see him today when he tucked in a few goals during a training match played on the wet pitch of Stadium Negeri.

According to our sources, the striker will take up the Asian foreign import slot shall he be selected to play for the Crocs.