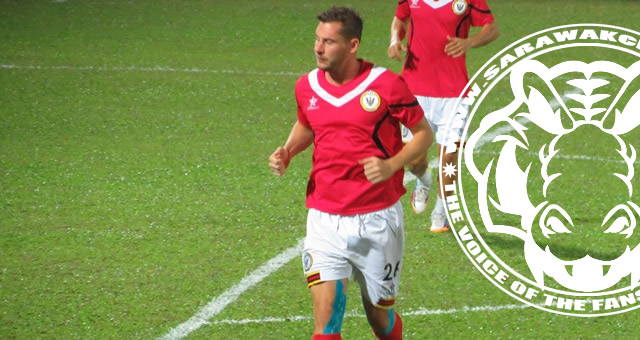 SarawakCrocs.com has learned from a very good source that Gabor Gyepes will be released by Sarawak FA despite him able to be fit before the season starts.

According to one of our sources, the defender will be able to play when the season reopens if he is given the right treatment for his broken toe which is expected to last for six weeks.

The source further adds that Gabor’s injury is not serious but an abrupt decision has been made by Sarawak Football Association (FAS) to not include Gabor in the 2015 team. The new season starts at the middle end of January 2015, which is about 7 weeks from now.

The news of Gabor possibly leaving the Crocs, although unconfirmed, will surely raise alarm bells in teams around the region looking for a complete and hardworking defender particularly since we have also learned that Gabor will be a free agent shall he be released by Sarawak FA some time next week.

Our source which is familiar with contract negotiation further clarifies that shall Gabor be released as a free agent, he will be able to negotiate with any team interested with him without much fuss.

Gabor which joined Sarawak in 2014, was highly said to be retained for the coming season, but a slight injury during training on the 14 November saw him dropped from the Sarawak team instantly with reason his injury is long term.  Interestingly, a said replacement for Gabor arrived almost instantly at Stadium Negeri after the announcement.

The hardworking defender, which is well liked by fans in Sarawak for his versatility on the field, made instant impact in Stadium Negeri upon his arrival with the defender scoring a couple of goals in the first few games he played.

Gabor, whom also played for English side Portsmouth, also proved to be an influential figure at the heart of the Sarawak defence with fans saying he is by far the best foreign defender the Crocs ever had since David Evans and Jeff Currans, two foreign legendary players whom was part of the 1992 FA Cup Champion team of Sarawak

The release of Gabor would certainly be a huge loss to the Crocs, with comments on Facebook already showing the fans being unhappy with the decision.