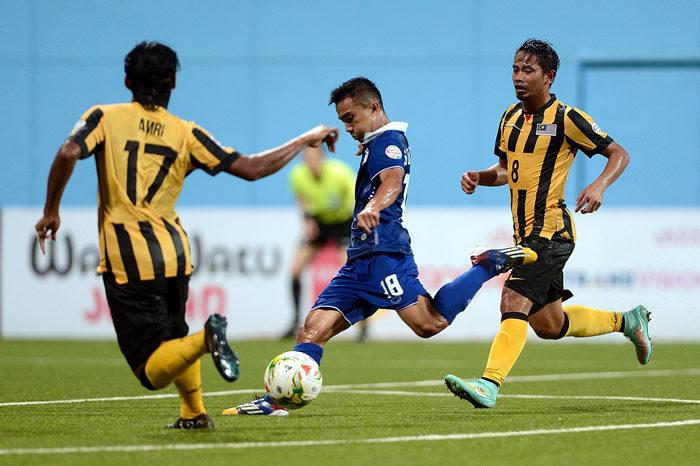 Undeterred by a lengthy lightning delay, Thailand once more produced late fireworks to beat Malaysia 3-2 and book their place in the AFF Suzuki Cup semi-finals on Wednesday.

Kicking off 2½ hours later than scheduled due to a spectacular thunderstorm that lit up the Singapore skyline, Kiatisuk Senamuang’s exciting young team twice came from behind before snatching a dramatic last-minute winner courtesy of substitute Adisak Kraisorn.

Coming on the back of their 2-1 defeat of hosts and defending champions Singapore – achieved thanks to an 89th-minute penalty – the Thais are guaranteed a spot in the last four, regardless of how they fare in their final Group B match against Myanmar on Saturday.

For Malaysia, however, their prospects of progressing hang by a thread. With just one point from their opening two games, Dollah Salleh’s experienced team need to beat Singapore at the weekend to keep alive their hopes.

Kiatisuk paid tribute to the battling qualities of his players. “The players never gave up, even when we were losing. It was a fantastic game and I’m delighted we have maximum points from our first two games,” he said.

For his part, Dollah refused to be downhearted. “I’m happy with the performance, but disappointed with the result. We still haven’t finished yet and I know we will fight to the end against Singapore.”

With the pre-match downpour at its heaviest and visibility seriously impaired, the Johnny Nash smash hit I Can See Clearly Now the Rain has Gone blared out from the Jalan Besar Stadium loudspeakers.

But once the rains relented and the surface water was cleared from the pitch, the Thais asserted their authority, creating a handful of half chances.

Nevertheless, it was the Malaysians who struck first in the 28th minute, veteran Amri Yahyah coolly sliding a low right-foot shot into the bottom left-hand corner of Thai goalkeeper Kawin Thammasatchanan’s net.

Prompted by Chanathip Songkrasin, Thailand continued to probe and it was no surprise when his BEC Tero Sasana team-mate Adisak nudged home the equaliser three minutes before half-time.

Adisak had only been on the field for two minutes, having replaced Kirati Keawsombat as the focal point in the Thai attack. His impact was instant, exchanging passes with Charyl Chappuis down the left and stretching out his left foot to poke the cross beyond Khairul Fahmi Che Mat in the Malaysian goal.

The noisy Thai fans were still celebrating when another moment of magic from Amri almost undid them. Seeing Kawin off his line, the 33-year-old midfielder unleashed an impudent lob from just inside the Thai half. The ball sailed over Kawin who was relieved to see the effort bounce off the crossbar.

It was another piece of fabulous individual flair that enabled Malaysia to regain the lead in the 60th minute via a sublime solo effort from Safiq Rahim.

As the Thai defence backed off, Safiq embarked on a jinking run that took him into the opposition penalty area where he was given the time and space to fire into the corner.

For the next 10 minutes, the Malaysians appeared more likely to add a third than Thailand did to find an equaliser.

But Chanathip, inevitably, was at the heart of the comeback. Just 60 seconds after seeing a powerful shot hit the post the diminutive midfielder unselfishly set up Chappuis inside the box.

The man who notched the late winning goal against Singapore did not need a second invitation, blazing a shot past the despairing dive of Khairul Fahmi.

It was no more than the Thais deserved and having survived a scare when a Malaysian header was cleared off their line with just minutes remaining, Kiatisuk’s men pounced.

After a fast break down the right, Adisak found the ball at his feet. Skilfully eluding his marker he fired a right-foot shot into the net to spark scenes of delight among the Thai players and their loyal fans.