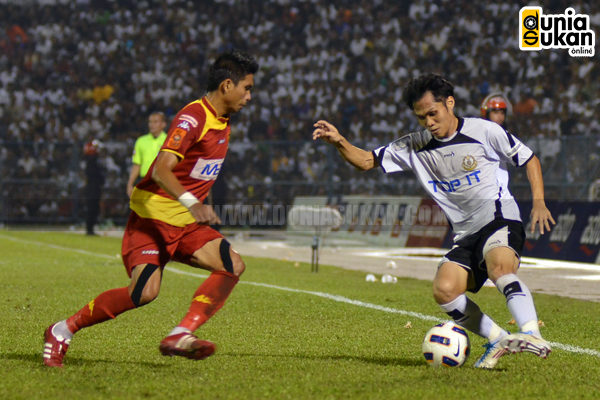 The re-birth of Sarawak FA in the Malaysian football scene has attracted back its local talents with the latest being Reeshafiq Alwi (right in white).

It was reported that the 30-year-old defensive midfielder will soon be snapped up by the Crocs after he has completed a medical check-up.

Reeshafiq had previously played his trade with Kuala Lumpur FA in 2008, before moving on to don the colours of PLUS FC.

The Kuching born player later went to join fellow Sarawakian Joseph Kallang at Terrenganu FA, before he left for PKNS FC upon his release last year.

Reeshafiq’s struggled to find his place in the starting line up of PKNS FC, but his return to the Crocs would be much welcomed by the home crowd.

The inclusion of Reeshafiq is expected to intensify the race for the starting line-up in Sarawak as the Crocs now boast of three defensive midfielders in Sharol Saperi, Guy Bwele and Junior Eldstal.

Aside from Reeshafiq, other local Sarawakians which have returned from playing elsewhere are Joseph Kallang Tie (Terengganu), and Zamri Morshidi (PKNS).