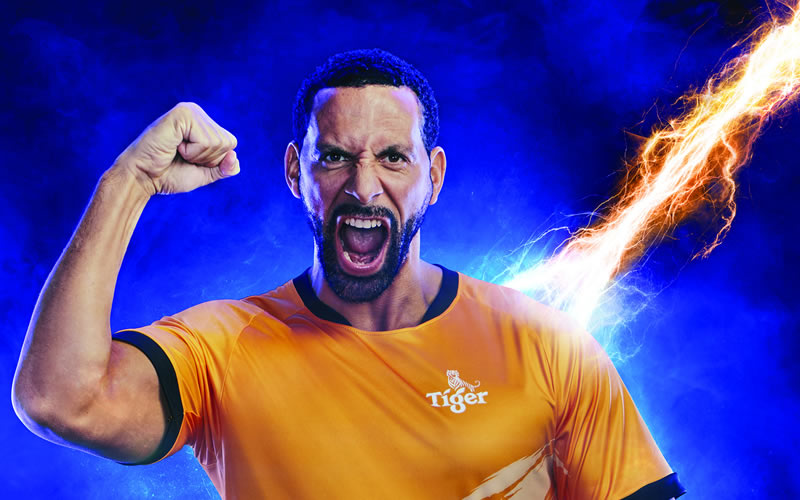 Tiger Beer, Malaysia’s No. 1 beer , is taking football back to the streets with the return of Tiger Street Football.

Tiger Street Football tournaments will soon be coming to a town near you – providing a platform for streetwise stars to uncage their skills and prove that they have what it takes to be the best.

Following a series of Regional Qualifiers kicking off in July, the top-rated teams will compete against each other at the Grand Finals to find the ultimate champions.

The winners will walk away with a cash prize of RM10,000, a trophy presented by legendary football star and Tiger Beer Brand Ambassador Rio Ferdinand, and of course, the ultimate bragging rights!

Ferdinand is the natural choice to front the campaign – growing up in a small council flat, he kicked his first ball on the streets of South London, Peckham; the place where he honed his football skills and learned to get up again and again, no matter how many times he got knocked down.

If you and your friends are football players with great passion for the sport, this is your time to shine – teams of six are invited to register now at www.drinkies.my/tigerstreetfootball for a fee of RM100.

Regional Qualifiers will begin in Kuala Lumpur on 13th July, followed by Penang on 14th July and Johor Bahru on 20th July. In addition to entry into the tournament, each team will receive exclusive Tiger Street Football kits and a Tiger football on the day of their Regional Qualifier.

The Grand Finals will see 8 of the best teams compete for the title – the first and second place from each Regional Qualifier and two ‘wildcard’ teams – those with the best goal difference across all qualifiers.

Footie fans who want to watch the top teams going head to head at the finals should clear their schedule from 6pm onwards on Saturday 27th July and kick on down to TREC KL for the Tiger Street Football Festival. In addition to the exhilarating Grand Finals, there will be an array of fun football activities, live music, delicious food and of course – plenty of ice-cold Tiger Beer. They’ll also get a chance to see legendary football star and Tiger Beer Brand Ambassador Rio Ferdinand, who will crown the champions.

For fans who’d love to get their hands on one-of-a-kind Tiger Street Football memorabilia including footballs and jerseys signed by Rio Ferdinand, or the chance to meet the legend himself up-close and personal, make sure to check out participating bars near you to find out how.

Various contests are running on Drinkies, Tiger Beer’s website and Facebook page as well, so don’t miss out!

Tiger Street Football is open to non-Muslims aged 21 and above only. For full details and competition rules, visit www.tigerbeer.my or www.facebook.com/tigerbeermy .