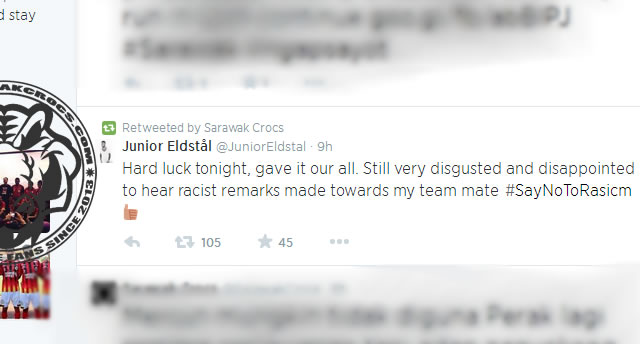 Reports have surfaced that a group of Sarawak fans watching the Perak versus Sarawak Malaysia Cup match have been attacked after the game.  It is not known if there were provocations made, but such aggressiveness is hugely uncalled for.

A video of the incident was uploaded by one of the fans on social media with them sarcastically thanking Perak for the ‘prize’ given to them in the incident.

Sarawak player Junior Eldstal has also taken to social media (photo) about his disappointment of crowd behavior in Stadium Ipoh.

The Sabah born midfielder claimed that there were a lot of racist remarks made by the home side supporters against his team mates, and that he was “utterly disappointed and disgusted” that such remarks were made.

Stadium Ipoh is no stranger to controversies during matches with Sarawak enduring heavy firecrackers during last years Piala Malaysia match. Despite that however, the Football Association of Malaysia (FAM) has yet to punish Perak severely with only monetary fines slapped on the FA.