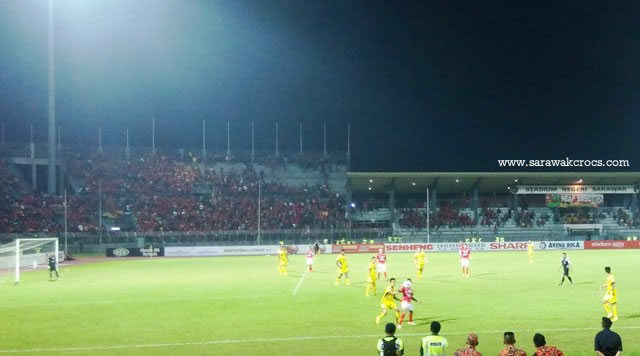 The Crocs started their Malaysia Cup campaign n a very positive note after they secured an important win over Terengganu at Stadium Negeri tonight.

Playing in front of a capacity crowd, the Crocs raced to secure their opening goal thanks to a penalty kick which Ryan Griffith slotted with ease. Rashid Aya won the penalty for the Crocs in the eight minute after a Terengganu defender decided to bring him down in the box to avoid him from taking a clear chance on goal.

Despite being one goal ahead, the Crocs dominated play with Joseph Kalang and S Chanturu making energetic runs at the flanks, with Sharol Saperi intercepting numerous passes made by the visiting side.

But Terengganu took advantage of the poor passing by the Sarawakians and started trying their luck on goal with Gabor Gyepes working extra hard along with his comrades Ramesh Lai, Hairol Mokhtar and Dzulazlan Ibrahim.

Terengganu almost leveled the score in the 25th minute but the home side had lady luck on their side as Sani fumbled away a direct shot on goal for a fruitless counter attack by the Crocs.

Junior Eldstal who seemed to be playing a more attacking role in the game, also had his fair chance on goal but the hard tackling Bikana was not to be defeated again.

In the 30th minute, fans at Stadium Negeri erupted with joy as a wonderful dummy by Joseph and Ryan saw the Australian beat the offside trap, before pushing the ball past Terengganu goalkeeper Sharbinee.

Another through pass came Joseph’s way a few minutes later, but the flag was up for a free kick to Terengganu.

Chanturu also had his share of chances, but a fluid teamwork showed by Joseph, Ryan and Sharol was blasted wide by the Kedah born player who only needed a tap to make it count.

The national player however didn’t miss when a similar opportunity presented itself again just before the half time whistle when he grabbed a loose ball in the penalty box, and curled a beauty past helpless Sharbinee, putting the Crocs safe ahead by three goals.

Terengganu came in after the breather determined to claw themselves back, and did just that when Mario Karlovic’s perfect header beat Sani Anuar at an early corner.

The East Coast side pushed harder for their second goal, and took control of ball possession heavily.

Robert Alberts then decided to bring in Ashri Chuchu for injured Ramesh, pushing winger Rashid Aya to an unfamiliar right back position.

The move proved deadly as Rashid’s late tackle in the box caused the referee to award a spot kick which Zairo blasted with perfection in the 73rd minute.

With the score still favouring the Crocs, Rashid again almost gave away a penalty to the visiting side but the referee waved the offence away.

Terengganu pressed harder to find their equalizer, but the Crocs ‘parked the biggest bus’ they had to ensure they came out eventual winners of the game.