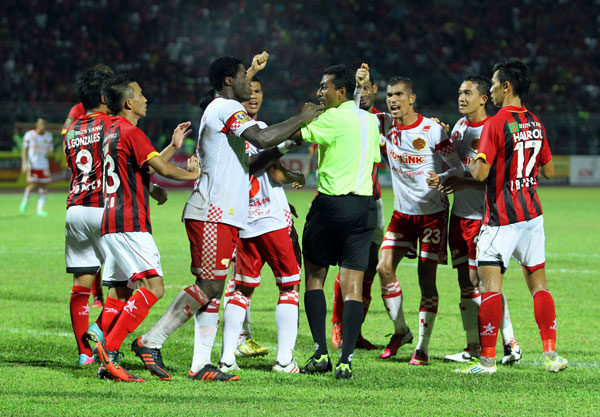 The game started off promising with both sides well balanced.

Sarawak however showed they mean business with Ashri Chuchu and Joseph Kalang Tie energizing the flanks of the Crocs.

In the 22nd minute, Milorad Janjus almot gave the home crowd reason to cheer when he calmly beat marker to push forward for an opportunity at goal. Unfortunately, his shot on goal was easy for Kelantan goalkeeper Khairul Fahmi Che Mat.

Kelantan replied the attack with a good cross from Tengku Hasbullah to Forkey Doe, but the later’s header was easy for Sani Anuar.

Sarawak were suppose to be one goal ahead minutes before the half, but the goal by Joseph was ruled as offside by the linesman.

From then on, it was Sarawak all the way, but poor finishing ensured both teams enter the dressing room level.

After the breather, Sarawak pushed harder for a goal but quick counter attacks from Kelantan rang alarm bells in the Crocs defences.

Forkey Doe almost made his effort for Kelantan count minutes into the second half, but his shot on goal was also ruled out as offside by the referee.

Sarawak replied with a long ball from Milorad to Joseph, but the ball bounced way too far for his reach.

The Crocs continued to raid the defense line of The Red Warriors, but poor ball control and finishing continued to deny the Crocs any goals.

Robert Alberts also tried to improve the score line by including Akmal Rizal, Zamri Morshidi and Reesyafiq Alwi into the game, but nothing came from the trio.

As both teams were keen to end the game with a draw, a mix-up in defence saw Forkey Doe easily slotting in Kelantan’s winning goal at the final minute, hence ensuring their fantastic record against the Crocs remain in tact.