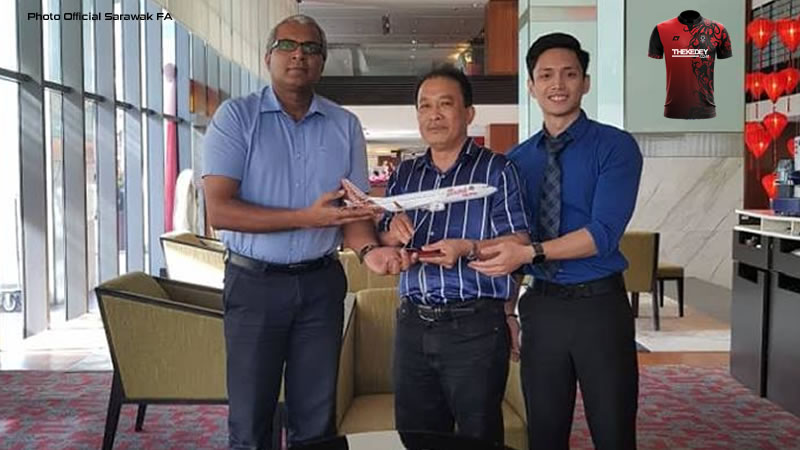 The Football Association of Sarawak (FAS) today announced that Malindo Air is their official airline for Sarawak FA in 2019.

The gimmick of the partnership was done today at a hotel in Bukit Bintang with FAS Presiden Posa Majais receiving a replica of the Malindo Air aircraft from Malindo Air Corporate Sales Executive Mr Jazlee Irfan Shah.

As the official airline of Sarawak FA, Malindo would also offer special fares and hotel stays for fans of Sarawak FA during both home and away matches.

Other details of the deal would be revealed on 26th January when Sarawak FA is set to unveil their new jersey for 2019.

In the meantime, do check out the SarawakCrocs Tribal Jersey which can be pre-ordered for just RM60 at www.theKedey.com.

SarawakCrocs adalah laman web/blog bebas yang melaporkan tentang perkembangan bola sepak Sarawak, Sabah dan Malaysia sejak 2013.
Contact us: sarawakcrocs [at] cyrildason [dot] com
© Copyright SarawakCrocs 2013 - 2019. IMPORTANT: By using this site, you agree to our terms of use and use of cookies. We are not responsible for all comments (including external comments) and links in this site. Any posting in this site should be self verified by the reader. Any liabilities from using this site is not our responsibility. | A blog project by Cyril Dason since 2013.
error: We appreciate it if you\'d share our link instead of copying our text. Thank you.