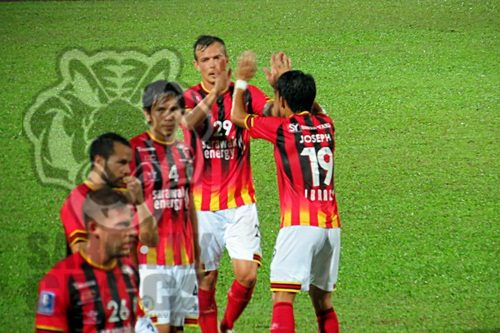 Sarawak are all set to bounce back when they meet Kedah tomorrow at Stadium Negeri following a defeat during the weekend match against Perak.

Rober Alberts men would be eager to show their home fans that they are still very much in the race for the Malaysia Cup, despite their poor showing in Ipoh.

With Robert’s tactic coming under fire from fans, it is likely that the Dutchman would look to return to his most successful tactics which sees Ronny Harun and Gabor Gyepes both manning the centre back. The return of Ramesh Lai on the left of the defense is also expected to improve Sarawak’s defence which have been criticized lately for leaking easy goals.

In midfield, Robert is expected to call Sharol Saperi or Mohd Lot for duty as he saw his gamble to partner Ronny and Junior Eldstal in such position failing miserably, with the Crocs overwhelmed entirely by Perak.

The striking force of Sarawak would also expect to see some changes with Ryan Griffith maybe set to be partnered with Rashid Aya, as Joseph Kalang is shifted to the flanks of the pitch.

Kedah are on a losing streak in the Malaysia Cup, having been defeated by Perak 2-0 in the opener, and 3-2 to Terengganu during midweek.

Their task looks daunting in Stadium Negeri, but Baddrol Bakhtiar will definitely try lead his men to score a victory in Kuching tomorrow.

Kedah would also look to bring in all their imports to ensure they come away with the best results from Kuching with José Franco Gómez, Namgung Woong and Billy Mehmet highly slated to make the starting list.

But despite the imports, Kedah also local players which are dangerous enough to create problems for the Croc. One man particularly dangerous is Khyril Muhymeen Zambri whom is known to be able to finish off chances provided to him with precision. Another lethal player would be Mohd Syamim Alif, which the Crocs need to keep an eye on shall he be played.

As usual, Stadium Negeri would be packed to the brim, and the Crocs are highly expected to continue their good run over Kedah this time around.