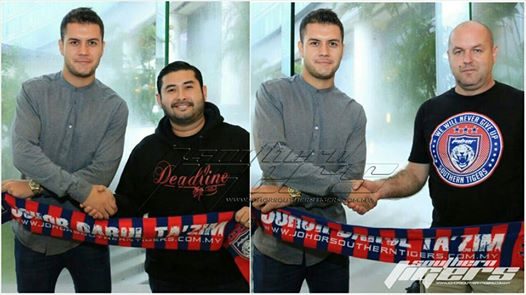 Junior Eldstal, which was highly said to be moving to Selangor has a new club, and it is official this time. His new club is none other than cash rich JDT, known also as Southern Tigers.

Interestingly, JDT has denied two rumours linking the midfielder with a move to Johor last season, but today, their official Facebook page has revealed that he will be serving them for the coming season.

Previously, Junior was linked to Selangor FA, with almost every newspaper and sports online portal saying that the Sabah born midfielder will be part of the Red Giants.

However, news soon broke out that Selangor was experiencing some sort of ‘financial crisis’, hence starting rumours that Junior’s move to Selangor may not be completed.

Nonetheless, Junior in an exclusive interview with us, reiterated that he is moving to a bigger club to expand his horizon, although he declined to name the team he was to join.

Junior’s move to JDT doesn’t come as a surprise to us considering we have linked him with JDT before, but we have to say that we are surprised it took so long for JDT to finally announced they have acquired Junior.

Nonetheless, Junior is set to be reunited with his former team mate S. Chanturu at Larkin for the new season.