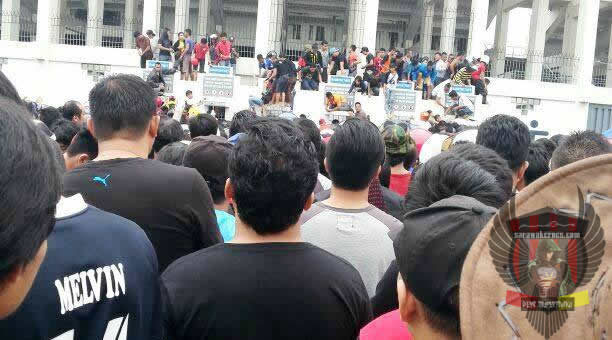 KUCHING: A hawker from Kampung Lintang at Jalan Haji Hashim Jaafar was sentenced to one year’s jail and one stroke of the rotan and fined RM400 in default two weeks’ jail by the Magistrate’s Court here, yesterday on two counts of forgery.

Magistrate Zulhairil Sulaiman imposed the sentence on Awang Jamal Awang Jemali, 31, after he pleaded guilty to the charges under Section 420, read with Section 511, of the Penal Code and Section 25(1)(a) of the National Registration Regulations 1990 for trying to sell fake Malaysia Cup tickets to a football fan and failure to produce his identity card when asked to do so by the authorities.

The accused admitted to cheating one Ali Hassan Salleh by inducing him to buy a fake football ticket to Sarawak vs Pahang match for RM40.

He also failed to produce his identity card when a police officer asked him to do so after the transaction.

The accused committed both offences at the State Stadium at about 5.30pm on 26 October, 2013.

An accomplice who pleaded not guilty to the charge of forgery was released on RM3,000 bail in one surety.

Zulhairil fixed 28 November for further mention of the case and 12 December for hearing.

The court was told that seven witnesses will testify in the hearing.

According to the facts of the case, the complainant who was manning the ‘A’ entrance of the stadium had asked the accused at the material time and place whether he had tickets for sale.

The accused said he had tickets for sale at RM40 each, and handed one to the complainant who noted that it was a forgery.

The complainant then placed the suspect under citizen arrest and handed him over to a policeman on duty.

The police questioned the accused who later took them to a spot under a big tree near his hawker’s stall where he pointed out his accomplice who had fake tickets.

The police also told the complainant to lodge a report to facilitate further action.

At about 1.00am on 27 October, the accused and his accomplice were arrested and two fake tickets, which bore the same serial numbers, were seized from them.

This is the first arrest and case involving the sale of fake football match tickets in the state.

Inspector Ahamad Ilias was the prosecuting officer in the case while both accused were not represented at press time.