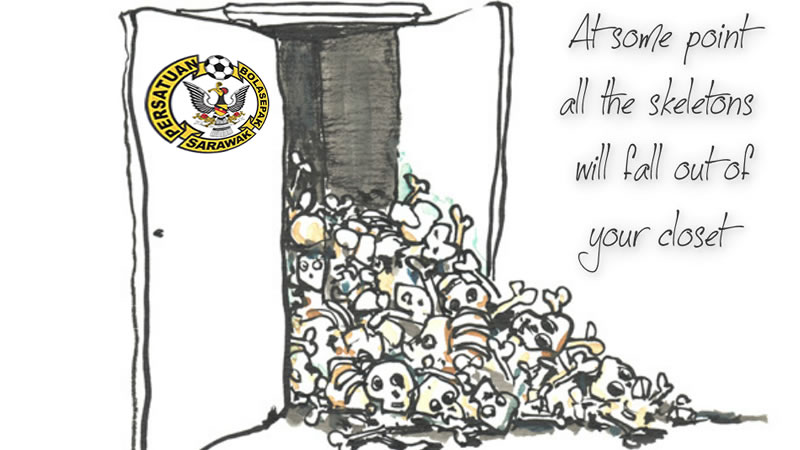 The Football Association of Sarawak (FAS) today claimed and reported Razali Dolhan for embezzlement of FAS funds in 2017, but this is likely the tip of the iceberg.

In our opinion, FAS had poorly handled the matter by publicly naming Razali and issuing a statement that tells everyone that FAS had indeed hidden the matter from the authorities since 2017.

This had caused many more questions to be asked by fans as the skeletons hidden by FAS are now being taken out of the closet by the same people that probably tried to hide them. – We are saying this because FAS in their statement below had stated they knew about Razali’s actions but tried to conceal it to protect his family and his reputation.

But the good thing is that FAS has finally opened one of the many hidden secrets that may have caused the downfall of Sarawak football since its former president Datu Sudarsono Osman left the top post in Sarawak football.

While the common Sarawak fan would have likely heard rumors about how things are done in FAS since 2017, the most recent claim by FAS, that one of its own embezzled funds five times in 2017 will definitely cause quite more than just a stir.

This is because Razali has now been named and shamed by FAS in the eye of the public and he would have no choice but to prove the allegations are false to clear his name.  To do this, we anticipate Razali would likely put up a fight and choose to also show ‘skeletons’ he know is also hidden in the closet of FAS.

Since Razali had held many portfolios for FAS in the past, this would mean he would have plenty to share and say, which could in a direct way unveil more things about FAS.

Well, we don’t want to speculate more or add sauce to the facts of what was revealed today.

However, like we were told on twitter, as outsiders of FAS, it’s time to sit back, relax, and eat our popcorn while the drama plays on.

…and to you reading this, thank you for following SarawakCrocs.